Last Tuesday, 105 students from 30 states across the country, representing over 40 organizations, participated in this year’s event.

The science projects demonstrated made use of STEM (Science, Technology, Engineering, and Mathematics).

Some of the students were able to make a presentation about their science project before the President of the United States.

Bill Nye, “The Science Guy,” also at this year’s event, interviewed some of the students outside on the lawn of the White House.

Nye’s first interview was with the three girl student members of “Team Rocket Power” from Maryland.

Rebecca Chapin-Ridgely, 17; Jasmyn Logan, and Nia’mani Robinson, both 15, worked after school and during weekends to construct and test their rocket, which was painted a bright purple.

As participants in the Team America Rocketry Challenge, the objective for their science project was to launch a rocket containing a payload of two eggs into the air at a minimum height of 825 feet within 48-50 seconds.

The egg payload needed to return to the ground – unbroken.

When asked if they were successful in returning the eggs back to the earth without any cracks, one of the students smiled, while responding with; “Most of the time, we were.”

Nye grinned, and questioned if they were able to reach the 825 feet. One student replied, “We hit it a couple of times; sometimes it [the rocket] was too high.”

Two mentors worked with the students to ensure their rocket experiments progressed safely.

Yes indeed, folks, this project was one of true “rocket science.”

Next to be interviewed was Parker Owen, 20, from Alabama, whose robotic science project was to make a prosthetic leg limb entirely out of a single, recycled bicycle.

Owen chose this project as a cost-effective solution for making prosthetics more accessible in developing countries.

He noted bicycles are being used as a major mode of transportation in many countries; when they break down or become old, they are commonly discarded.

In addition to the recycled bicycle; three bolts, three nuts, and a few zip-ties were also used.

The prosthetic leg has adjustable muscle fibers and tendons made from the bicycle’s tire tube, which provides the resistance and force needed during strenuous activities.

The prosthetic leg limb is adjustable to fit any size person, and is designed to accommodate a person’s growth, and muscle gain and loss, over the course of an individual’s lifetime.

Owen mentioned he has patented the process used to make what he calls “the cycle-leg.”

Owen’s design was created as a solution to significantly improve the quality of life of people in the developing world.

Crystal Brockington and Aaron Barron, both 18, researched a way to make an economical, yet sustainable, semi-conductor material to increase the efficiency of solar cells.

This new material combination better harnesses the power of the sun.

The research included finding an alternative nano-particle material which could be used with “quantum dots,” which are a type of nano-crystals.

They wanted to make a solar cell material that worked without cadmium; a soft metal and chemical element having carcinogenic effects to the environment.

The two students discovered by alternating the heat synthesis of the nano-particles, in conjunction with other material such as titanium dioxide, they could increase a solar panel’s efficiency.

Aaron was explaining how they were able to obtain a 48 percent efficiency level, when Bill Nye suddenly interrupted him saying: “Forty-eight percent?”

“Wow! You should get some kind of award,” Nye told the smiling students.

While the students were being interviewed, the President’s family dog, Bo, walked by and was greeted enthusiastically.

Back inside the White House, President Barack Obama stopped by the science fair exhibits being displayed, and talked one-on-one with the excited students about their particular project.

Many of us also participated in our school’s science fairs.

Yours truly, while in seventh grade, was occupied in creating an exhibit displaying the planets of this solar system rotating around the sun.

I cleverly named my science fair project: “The Revolution of the Planets.”

And yes, this science project won a first-place blue ribbon, which I was very proud about receiving.

Twitter messages about this year’s White House Science Fair can be read using the hashtag #WHScienceFair.

The webpage for the 2014 White House Science Fair is: http://www.whitehouse.gov/science-fair. 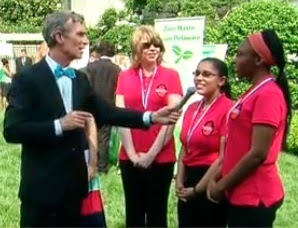 Search the Bits and Bytes weblog

Translate to your preferred language

Welcome to my Bits and Bytes Weblog! 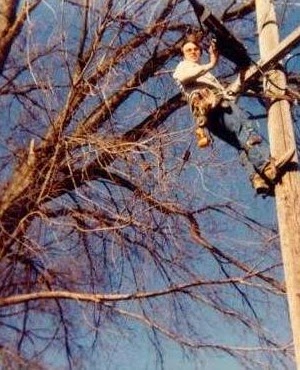 This is me (Mark Ollig) atop a telephone pole in my home town of Winsted, Minnesota USA. Thanks for stopping by and checking out my blog. You can contact me at: bitscolumn@gmail.com.